Michael Johnson runs johnson banks, a London-based design consultancy with a global reputation. His company works on a wide range of branding projects, often imbuing each job with its own distinctive typographic style. Michael also regularly initiates typographic research projects, such as the 3D alphabet project, ‘Arkitypo’, and the bilingual English/Japanese typeface, ‘Phonetikana’. He has won most of the design world’s most prestigious awards (including multiple D&AD ‘yellow pencils’), has dozens of designs in the V&A’s permanent collection and was D&AD President in 2003.

Drawing on all the tools we currently have at our disposal, Mark will take you through the decisions you can make to make your typography as responsive as your layout.

Mark Boulton is a web designer and author, and member of the ISTD. He is the founder of Mark Boulton Design, and co-founder of indie publisher Five Simple Steps. Sometimes outspoken, always passionate, Mark is obsessed with applying the fundamentals of good typographic design on the web. Mark lives in South Wales with his wife and daughter, a small collection of neglected bonsai and a guitar he wish he owned when he was 18.

Putting the Fonts into Webfonts

There are compelling questions about how foundries can offer web designers an expressive medium (and readers a rich one), and what it means for typography to be visually, mechanically, and culturally appropriate to the web. Join Jonathan Hoefler on an exploration of this side of webfonts, and a discussion of where the needs of designers meet the needs of readers. You’ll get to see why H&FJ believe that webfonts promise so much more than just ‘fonts on the web.’

Jonathan Hoefler is the founder of Hoefler & Frere-Jones, the type foundry responsible for some of the world’s most beloved typefaces. Fast Company named them one of the most innovative design companies in America, the Museum of Modern Art acquired four of their typefaces for its permanent collection, and President Barack Obama ran his second election campaign amidst a sea of typefaces from H&FJ.

Get Your Hands Dirty

How far can we push type on the web? As webfont choices have expanded over the years, so have our options for what we can do with them. We’ll explore what’s possible with CSS, Javascript, and a little bit of elbow grease.

Trent Walton is founder and 1/3 of Paravel, a custom web design and development shop based out of the Texas Hill Country. In his spare time, Trents writes about what he learns at his blog, and on Twitter. Trent’s wife has put him on a font allowance.

The Future of Responsive Typography

Some of the most fundamental and important elements of typography still can’t be addressed on the web of today. Even as the adoption of webfonts spreads, web typographers are stuck with low-level hacks and antiquated standards that often favor support for old technologies more than innovation and logic. By discussing ideas about font hinting, media queries, typeface design, and more, this talk will explore the unrealized potential for context-specific type, and how it might influence responsive design in the future.

Nick Sherman is a Brooklyn-based typographer working with Font Bureau and Webtype to promote typefaces for print and digital media. Originally from Cape Cod and Boston, he is also a skate­boarder, pizza enthusiast, printer, musician, and classic horror film buff.

On Icon Fonts & Working with Designers

Ever spent countless hours crafting a totally awesome type system for your beautiful design, only to have it lost in translation when it goes to development? Let’s examine type and icon fonts through a developer lense and see how to work together to get everyone on the same page!

Jenn Lukas is a web developer working with Happy Cog in Philadelphia. She writes for The Nerdary and has a regular column in .net magazine. When she’s not crafting sites with the finest of web standards, Jenn teaches HTML and CSS for GirlDevelopIt and runs ladiesintech.com.

Christian Schwartz is a type designer and typography consultant. Christian is one half of Commercial Type, a joint venture with Paul Barnes, with whom he has collaborated since 2004 on various typeface projects, most notably the award winning Guardian Egyptian.

Berlin-based Dutch type designer Luc(as) de Groot has worked with and for many well-known companies and publications. He has made custom fonts for prestigious newspapers such as Folha de S.Paulo, Le Monde, Metro and Der Spiegel in addition to creating corporate type for international companies including Sun Microsystems, Bell South, Heineken, Siemens and Miele. He designed two font families for Microsoft: the ‘monospaced’ font family Consolas, the new alternative to Courier; and Calibri, the new default typeface in Microsoft Word. 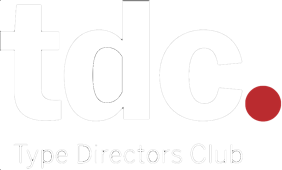